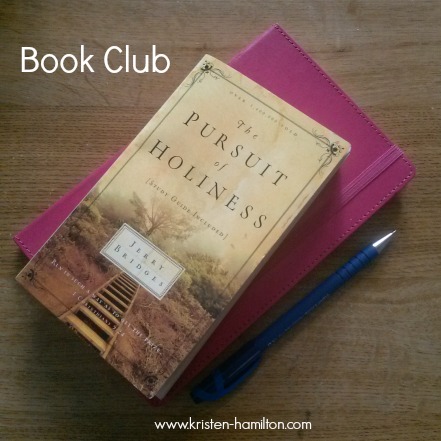 This has been an extremely busy final week of school for the girls and me. On Monday, Kaitlyn’s kindergarten class walked to a diner for free ice cream cones and I joined them. On Tuesday, Alexis & Jasmine’s classes participated in the annual 3rd, 4th, & 5th grade kickball tournament. On Wednesday was the annual school “Field Day” and picnic. I was at the school all day, running the “ring toss” game. (It’s set up in stations with a carnival theme including games, activities, and snacks.) I have a free day today, thus the blogging! Tomorrow, the kindergarten classes are walking across the street to a pond/dam to have a picnic lunch, and I’ll be going along for that.

Today, I’m on chapter fifteen, called Holiness and Faith. This was a defining chapter of the book for me when I read it the first time, two years ago. On the last page of the chapter, I had written: Faith + Obedience = Holiness. In all simplicity, that is what it boils down to. This time around, I wrote more of a flowchart: Salvation => Holiness => Faith, with two arrows off faith: 1. Obedience and 2. Trusting God’s Promises.

“By faith Abraham, when called to go to a place he would
later receive as his inheritance, obeyed and went, even
though he did not know where he was going.”
Hebrews 11:8

This chapter looks a Hebrews 11, specifically the stories of Abraham and Noah, as examples of great heroes of faith. Both Abraham and Noah were called to do things by God that seemed unreasonable, absurd, or even stupid in the eyes of anyone watching. Many times, the same thing happens to us.

God calls us to something, oftentimes contrary to human reason and the world’s view. Did you know that when God called Noah to build the ark, the earth had never before seen a drop of rain? Yeah. So not only did everyone think he was utterly nuts, talking nonsense about water drops falling from the sky, but no one even knew what a flood was. Our callings might not make us appear to be insane like that, but following God’s precepts makes us pursue morals, values, and goals that are opposite to the majority of other people in the world. So it’s by faith that we obey and it’s by faith that we trust God to uphold and fulfill the blessings He’s promised if we obey.

We need to have conviction about the necessity of obeying God’s will, as well as confidence in the promises of God. Without these elements, we won’t do the hard part of carrying out obedience.

I want to quote a few sentences from the book, because Jerry says it perfectly:

“No one can pursue holiness who is not prepared to obey God in every area of his life. It calls us to obey God even when that obedience is costly, when it requires deliberate sacrifice and even exposure to danger.

Obedience to the revealed will of God is often just as much a step of faith as claiming a promise from God.

…since obedience is the pathway to holiness – a holy life being essentially an obedient life – we may say that no one will become holy apart from a life of faith.

How often do we fail to obey God’s clearly revealed will because we do not exercise faith?

And because we do not have a firm conviction that “without holiness no one will see the Lord” (Hebrews 12:14), we do not seriously pursue holiness as a priority in our lives.

Faith and holiness are inextricably linked. Obeying the commands of God usually involves believing the promises of God. One definition of faith might be “Obeying the revealed will of God and trusting Him for the results.”

“Without faith it is impossible to please God” (Hebrews 11:6). If we would pursue holiness we must have faith to obey the will of God revealed in the Scripture and faith to believe that the promises of God will then be ours.”

Here’s a New Testament example that Jerry uses. Matthew 6:33, “But seek first His kingdom and His righteousness, and all these things will be given to you as well.” There’s a command and a promise. If we don’t believe in, have faith in, or trust in God’s promise, then it’s difficult to pursue obeying the command. The things of life end up taking top priority, instead of seeking God first.

2. Read through Hebrews 11, noting the instances of obedience by faith. List five things which some of the persons mentioned in this chapter believed. Which is the most meaningful for you, and why?

3. List five ways in which the persons mentioned in Hebrews 11 obeyed God. Which is the most challenging example for you, and why?

This site uses Akismet to reduce spam. Learn how your comment data is processed.